"One night he went to Eveleth to attend the Miners' Ball.
If you have not danced in Eveleth, you've never danced at all!"
—from "The Finn Who Would Not Take a Sauna," by Garrison Keillor
​Constructed in 1912, the Eveleth Auditorium came into being in response to the 1911 passing of a State Legislature law appropriating $10,000 toward the erection of an armory to any city or town that would furnish a suitable site and guarantee $1,000 for the support of the militia. Eveleth’s Company F of the Minnesota National Guard had been organized in 1908 and was renting space at Vail Hall on Grant Avenue at a cost of $720 per year, so the idea of a permanent home for Eveleth’s militia held much appeal. The City found a suitable location, purchased the property for $3,400, and presented the deed to the state. Due to the mineral reserves under the property, the state was unable to go forward with their offer. Despite the withdrawal of state funding, Eveleth’s City Council decided to go ahead with construction, as Eveleth was in need of an armory and a public hall where public meetings and gatherings could be held. 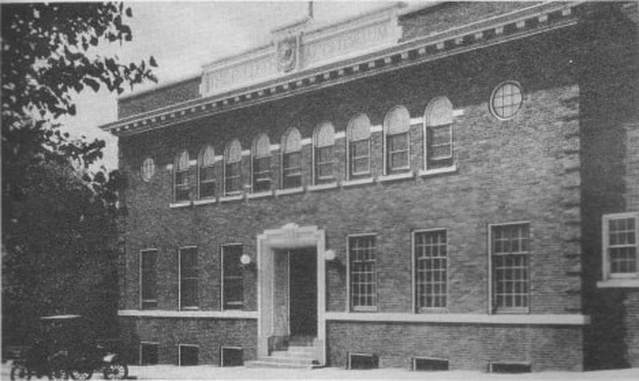 From the souvenir booklet for Eveleth's Diamond Jubilee
The design of architect Anthony Puck of Duluth was selected as the one nearest meeting the requirements of the city, and A. Roberts & Sons were chosen as general contractors on April 3, 1912. Construction began that spring and was completed within the year. The opening and dedication of the Eveleth Auditorium and the Fire Hall next door was held at 8 p.m. Friday, November 22, 1912.

Press coverage of the opening of the Auditorium noted that the main hall was 68×71 feet, and provided with opera chairs for 780 persons, although the reporter estimated that well over 1,000 people attended the event. The stage is 50 feet wide and was equipped with five dressing rooms for ladies and two for gentlemen. There were club rooms, shower baths, a kitchen, and a dining room. In the early years of the building’s operation it was open at all times for the free use by all local associations that needed the hall or its smaller rooms for gatherings to promote community spirit. The basement housed a rifle range as well as lockers for Company F’s militia equipment. There were plans for a bowling alley in the blueprints, but it unknown if the lanes at the Auditorium ever existed.

The first of many traveling entertainments, a play called The Fortune Hunter, was held Sunday November 24, 1912. Billed as “Rowland and Clifford’s massive production of Winchell Smith’s Comedy Triumph”, the play, playwright, and production company has been lost to obscurity. Ticket prices were $.50, $.75, $1.00, and $1.50. 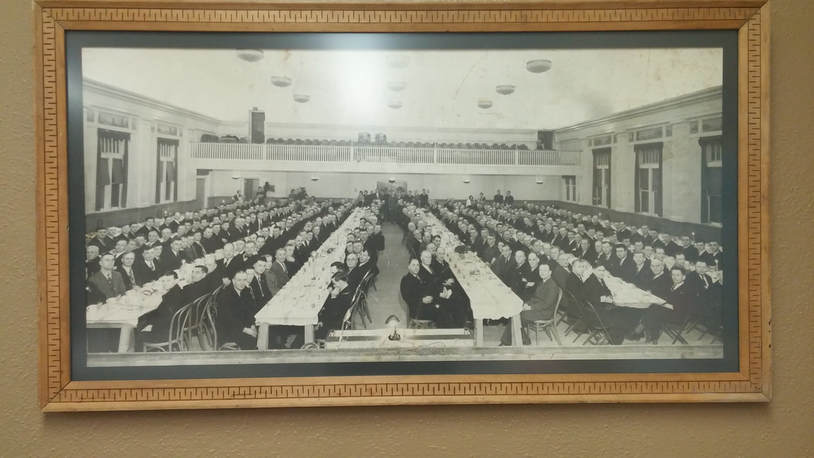 This photo, taken from the stage of the Eveleth Auditorium, currently hangs inside Eveleth City Hall.
Over the years the building housed concerts, theater productions, dances, dinners, sporting activities, and other community gatherings. A new armory was built west of the Hippodrome in 1951, and use of the Auditorium gradually declined. Cluett, Peabody, & Co. began leasing the Auditorium in 1964, using the building as a factory for Arrow brand pajamas and underwear. In 1985, Polar Enterprises (now Textiles Plus) began a screen printing operation in the Auditorium that lasted about fifteen years. The Auditorium was the filming location for a union hall scene in the 2005 film North Country, starring Charlize Theron, and the Duluth-Superior Film Festival hosted a 10-year anniversary screening of that movie at the Auditorium in 2015.

The Auditorium is undergoing needed renovations to restore its functionality as a public space. The renovation project began in 2012 with Phase 1, which addressed asbestos removal, egress improvements, sprinkler system repairs, and upgrades to emergency exits and Americans with Disabilities Act (ADA) access requirements. Phase 2 of the restoration, which includes upgrading the heating systems, adding ADA-compliant restrooms, repairing and repainting walls and ceilings, installing lighting on the main floor, and upgrading electrical through the building, is essentially complete. The layout of the building has not changed significantly, except for the construction of new restrooms and a small kitchen near the lobby area. Also, carpet was installed on most of the main level when the City decided not to refinish the original hardwood floor. These improvements will once again allow groups and organizations to utilize the building, which has faithfully served the community for over a century. The main floor is the only level currently accessible to the public. It is unknown when work will begin on the mezzanine and basement levels.