Heritage Committee member Lois Ferguson shares the 100-year history of an Eveleth commercial building.
​
Author’s note: After living in Hoyt Lakes, a planned community with its six styles of residence homes that were originally built for employees of Erie Mining Company, moving to Eveleth in 1992 was an enjoyable experience. I always had an interest in old buildings. It was fun walking around the city looking at the variety of old and newer homes and businesses. One business building at 412 Jones Street with a 1917 date etched into the upper part of it was brought to my attention. I had walked by this beige brick building many times. One hundred years—what interesting stories those walls could tell!

In the years leading up to 1917, Eveleth was a busy, emerging mining community. New homes, public buildings like City Hall, the library, and the auditorium, and businesses were being built.

In 1909 August Bratulich and his wife (Marishka) Mary moved to Eveleth and made their home at 304 Jackson Street. They started a business that they named the New Bakery. It consisted of a series of sheds that stretched from the house to the alley. Each individual shed contained one aspect of the business. One held the flour, one the oven, one contained the fryers for donuts. A hay barn and horse barn completed the compound. There was parking for the wagons in the back.

In 1917 August contracted with Gust Anderson of Chisholm to build a 25 by 125 foot modern building to house his New Bakery. August was concerned about fire safety and had his building built 3 bricks thick. The latest equipment was installed for baking and frying. Sanitary glass cases were used to display the bread and baked goods. The old set up was sold to John Pazzelli who also operated a bakery out of the property for several years. August and (Marishka) Mary and there 7 living children moved into the upstairs living quarters which included 9 bedrooms.

The December 27th, 1917, edition of the Eveleth News reported that a combined grand opening Christmas, New Years, employee appreciation party was held. A meal that included lamb, ham, chicken and a whole pig complete with cherries in the eyes and an apple in the mouth, potica, strudel and a variety of buns and bread was provided. The members of the Slovenian Men’s Chorus and a Victrola provided music for the gathering. Plenty of eating, drinking, dancing, singing and storytelling was enjoyed by the guests. The list included Francis Postudensek, Ozzie Osmundson, Javo Radakovich, George Spolarich, John Bernard, Tony Kozar, Louie Putzel, John Maurine, Mary Drobnick, Sam Lagges, George Brince, Dominic Pietrantonio, Paul Ceasaretti and the Volcanseks, Miroslaviches. Panians families. It was a wonderful celebration.

The bakery prospered. The trolley was utilized. August filled wooden bakery boxes with a variety of baked goods that included his special Table Queen Bread and shipped them on the Mesaba Electric Railway’s interurban streetcars to Gilbert and Virginia.  A horse drawn wagon was used for local deliveries.

August was proud of the cleanliness of his new bakery.  The newspaper advertising let it be known that cleanliness was paramount in his establishment referring to other nationalities as lacking in his quality of cleanliness.  This type of advertising would be frowned on today but was acceptable in 1917-1920. 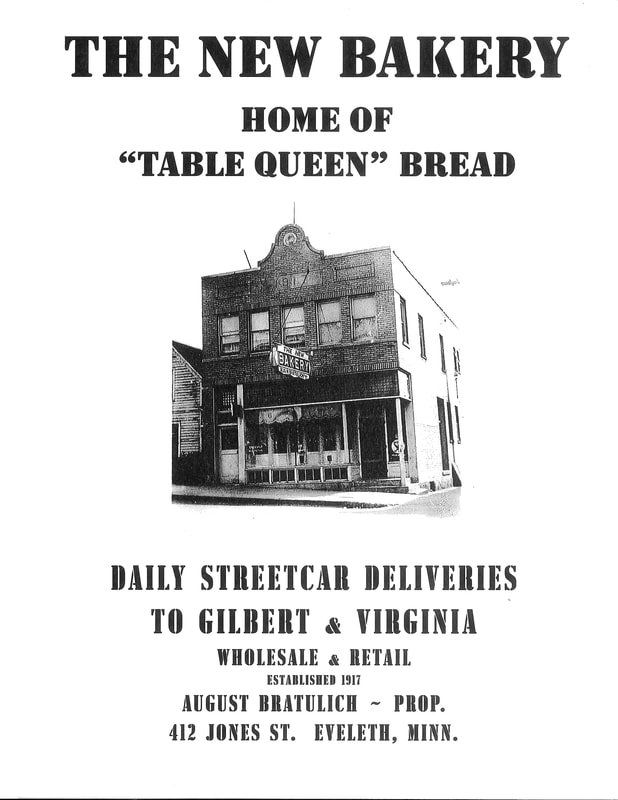 ​Tragedy struck the Bratulich family in 1919. Mary (Marishka) died 2 days after giving birth to her ninth child. August was left to deal with the bakery and his large family.

Francis Postudensek helped with the children in addition to her duties as a bookkeeper and sales clerk.  (Erminica) Enna, and (Editta) Edith Picini, and (Ivanka) Jeanette Preodor, whose husband had died, and her son Edwin came to live wth the Bratulich family and to help with the younger children.

A few years after Mary’s death, the second story was expanded to 125 feet. Josephine and Jeanette Mosley lived in three rooms on the second floor. These rooms were later made into a dentist office for Dr. Tippet. Instead of paying rent Dr. Tippet provided dental services for the Bratulich family.

The bakery bought a delivery truck to replace the horse drawn wagon.

The building was empty for a few years. In 1937 the building was remodel to become the State Theater. The floor was slanted to accommodate theater seating; the floor was cut loose from the walls to do this. The theater featured rococo lighting and burgundy mohair frieze seats. The walls were adorned with nymphet girls leading whippets or greyhounds on leashes. A billboard was installed on the alley side and a smaller one went in the front of the building for movie advertising. A man by the name of William Crouse managed the theater from 1937 to 1946. 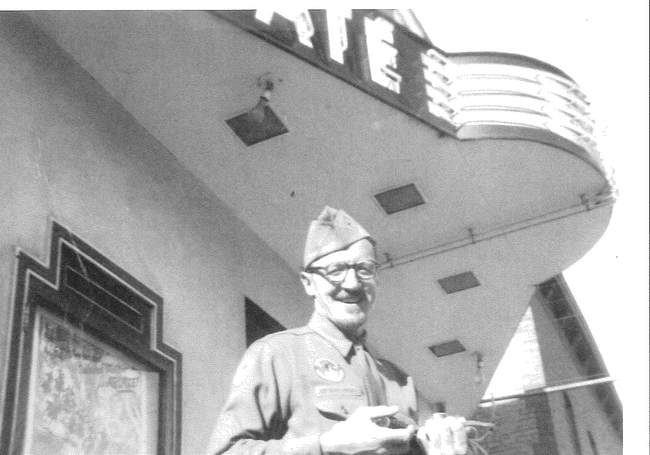 A Bratulich brother in front of the State Theater
​The quality of the building was put to the test when Joe Skrinner was hired to level the floor back to its original position. The inside walls were soaped with Ivory soap, then it was jacked back to level. It went up smoothly. The walls stayed in place and had no problem with this test.

The next transformation occurred at 412 Jones Street in 1957 when it became the United Gas company, later Northwest Gas and Power. The sturdy concrete floor in the rear of the building was perfect for the company to load their heavy equipment and gas tanks.

August retained ownership of the property and continue to be active in community affairs until his death in 1967. Some of the jobs that he held after the bakery closure were 1935-1937 the Central Lakes peat plant, 1940-1941 researcher for the city of Eveleth, 1942-1945 city treasurer and 1946-1949 employment clerk for the city.

Ed and Shirley Bratulich paid off the family and became owners of the property.

Ed died in October 1968. Shirley took over management of the space. She lived in the upstairs 3 bedroom apartment until the late 1970’s.

The gas company leased the downstairs until sometime in the 1970’s.

The theater marquee deteriorated and was eventually removed, cut up and sold for scrap.
​In the late 1970’s, Richard Haney, who lived in Spain, bought the property from Shirley.

Shirley managed the building for him. A business that built custom tavern bars for home use and sold paraphernalia that was used with drugs was the next occupant.

For a while in the 1980’s a video shop run by Bob Bozicevich called the property home. He now runs his shop on Grant Avenue.

A gentleman named Louie Babich bought the space from Richard Haney. He ran a car repair shop in the rear of the building from 1985 to 1988 and filled the space with scrap metal.

The property was returned to Shirley Bratulich.

In 1988 Bill and Jane O’Neil purchased the building. Extensive remodeling was done to bring the building up to code. Bolts from the theater operation were still attached to the floor. It took a great deal of grinding to smooth them down to floor level.

The space that was Dr. Tippet’s office was remodeled. The wall partitions were removed and it became an arcade with pin balls and a jukebox, a place for young teens to congregate and hang out. It was shut down after about 2 years.

The upstairs was remodeled into four one-bedroom apartments. Dr. Tippet’s spaces became a studio apartment. All of the units have fireproof doors. Three skylights were removed.

It is rumored that a friendly ghost occupies the upstairs area. Tenants have heard footsteps on the stairs and seen shadows on the walls.

The downstairs area became a place to race radio controlled cars/trucks. From there it transitioned into a hobby shop with an ice cream parlor that included pizza, candy, hot dogs, soda pop, and hot pretzels.

A lettering shop was the next transformation. The O’Neals bought Swanson’s custom embroidery from Bob Swanson, Mountain Iron-Buhl’s athletic director. Mr. Swanson was a first cousin of Kevin McHale, former NBA all-star and manager of the Minnesota Timberwolves. Bob was able to procure clothing accounts with the U of M and UMD.

The shop contains a wide variety of embellished clothing. Custom embroidery is done in the back of the building where customers can decide what designs or logos they would like to have put on their clothing and athletic wear. Mr. O’Neal is happy to do the design for the customer in the back of the shop. They also produce tackle twill for local schools and businesses. The shop once served the needs of 12 school districts including the entire Duluth school system.

The business is open on Tuesday, Wednesday, and Thursday from 10 until 4. The hours have been reduced due to Mr. O’Neal’s declining health.

A water fountain from the theater era holds a place of honor by the front door of the shop. A section of the inner theater door is part of the division between the retail space and the back of the building. It has been repainted from its theater days. The original front entrance door is in the basement. 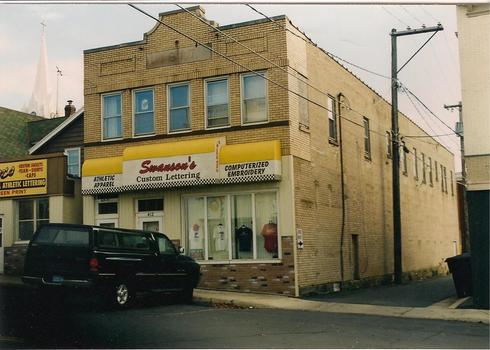