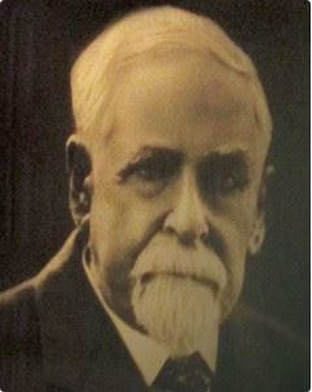 Erwin Eveleth was born to Welsh parents in Darien, New York, on November 3, 1842. The Eveleth family moved to Saginaw, Michigan, when Erwin was seven years old. There he worked on a farm, as a store clerk, and as a warehouse worker. Eveleth attended the public schools in Saginaw and a business college in Detroit. In the fall of 1862, he began working with timber cruiser (estimator) and mining investor John T. Jones, and then joined the Detroit lumber firm of Robinson and Flynn in 1865. Robinson and Flynn purchased the land on which the city of Eveleth now stands, and Jones was an associate in forming the early townsite.

Erwin Eveleth was called “one of the best timber cruisers or timber estimators in the entire country” (Kerr, 140). Cruisers examine the trees on plots of land to determine the timber value. Eveleth owned timber and farm land in Michigan, Wisconsin, Minnesota, Washington State, and Mexico. His timber cruising brought him to the iron ranges of Michigan and Minnesota. In 1882, Eveleth came to the Mesabi Range and cruised pine lands near present-day Iron Junction and the city that came to bear his name.

When David T. Adams, Neil McInnis, and other Eveleth founders met in April 1893 to name the new townsite they were forming, the task proved difficult. McInnis wrote in 1906, “I don’t know whether everyone is aware that it is not always an easy matter to find a name for a town. Many a name proposed for this one had to be abandoned because it was already in existence in some other part of the state.” Adams favored “Robinson” after George, the timber speculator from Detroit and a fee owner of the Adams Mine. However, Robinson’s business partner Elisha Flynn objected. “I never knew why,” Adams later wrote, “but I always surmised that he thought that the town would never amount to anything, and did not want his name attached to it” (Van Brunt, 517).

Adams then asked for the name of the man who first cruised the land for timber. Adams compared “Eveleth” with other names such as Iron Point and Iron City but found Eveleth to be most appealing and “an easy name for the Scandinavian element to pronounce.” Adams wrote to Mr. Eveleth, who allowed his name to be used for the new town. It is said that the name was officially chosen in the original Adams Mine office, a log cabin that once stood west of Northside Park.
​
Erwin Eveleth and his wife Jennie moved to Corunna, Michigan, in 1871, where they lived for the rest of their lives. There Eveleth also operated a farm and a general store. He served as a city councilor, school board member, postmaster, and mayor, and was a member of the local Masonic lodge and the Tent of the Knights of the Maccabees. One of Mr. and Mrs. Eveleth’s ten children, Charles, became a timber cruiser himself, having started that career with his father at the age of twelve. Charles later dealt in timber and coal in Kentucky. Erwin Eveleth died two days after his 80th birthday. He is buried in Corunna’s Pine Tree Cemetery—an appropriate resting place for a man who made his life’s work out of timber. [Click here for his entry on the website Find-a-Grave.] Framed photos of our city’s namesake hang in the Public Library and the Council chambers of City Hall. Members of the Eveleth family visited the town named for their ancestor during the city’s 50th, 75th, and 100th anniversary celebrations.
Sources:
Chapman Bros. Portrait Biographical Album of Clinton and Shiawassee Counties. Chicago: 1891
Evening News Association. Men of Progress: Embracing Biographical Sketches of Representative Michigan Men. Detroit: 1900
“‘Father’ of Eveleth Coming to Village” Duluth News-Tribune 29 October 1921, p. 4.
Kerr, Charles. History of Kentucky Vol. IV. American Historical Society, Chicago, 1922.
Van Brunt, Walter, ed. Duluth and St. Louis County, Minnesota: Their Story and People Vol. II. American Historical Society. Chicago: 1922.
Woodbridge, Dwight E. and John S. Pardee. History of Duluth and St. Louis County Past and Present. C.F. Cooper & Co. Chicago: 1910.