Adams Location, also known as Adams Hill, was a group of mine employees' houses northwest of present-day Northside Park. Perhaps because the area was somewhat remote, residents of Adams Hill occasionally caused trouble for law enforcement. There were some noteworthy shootings in the first decade of the 20th century, and police raided several blind pigs (illegal saloons) leading up to and during Prohibition. (A riot nearly broke out during one blind pig trial in 1917!) Children attended the Adams Kindergarten (at left center in the above picture), the Lincoln School, or the Lincoln Annex (originally called the Adams School).
​
A panoramic view of the Adams Mine, from Minnesota Reflections
Joseph Sorcum's home on Adams Hill, from Minnesota Reflections

Little remains today, except signs for the Old Virginia Road and Adams Location Road, along with a few houses. As the mine pit grew larger, houses were either demolished or moved. Most houses were gone by the 1970s.

Growing up on Adams Hill

"In the 1930's and 1940's, our lives were simple and fun and games were of our own making. We lived near Adams Park and went there daily. There were swings, slides, and trees to climb—many, many trees at that time. We had picnics consisting of strawberry jam sandwiches and Nectar to drink (today's Kool Aid). As we got older we played games like Run Sheep Run. In the early evening, we would gather under a tree and have sing-a-longs with the Smokey sisters sometimes playing their guitars. It was mostly Cowboy Songs—called Country Western today.

"Walking was our only means of transportation. Whether it was to hike the Old Virginia Road to find a place in the woods to picnic, go to school, to church, the Library, or wherever, we walked. The Library was one of my favorite places to go as I grew up. Wherever you went, people knew you.

"There were two movie theaters and movies were not rated. To roller skate, we had to find some paved sidewalks as the ones by our house were wooden planks. In winter, there were always ice rinks—some open fields were flooded and they'd freeze over for skating. In summer, baseball was played in open fields. We always managed to find something to do.

"The last time we visited, we were disappointed to see Adams Park, and no longer is there an Old Virginia Road or Adams Road and old friends' homes were gone. The Memorial Park has changed so much—the Library has shrunk and where are all the trees that had plaques memorializing Civil War and World War I veterans? What happened to the bandstand where the city band put on concerts?

"It felt strange visiting the High School—seeing old classrooms and how they have shrunk in our memories. The improvements and additions look great. I hope we can come back to visit before too many more years pass. We'd like to visit the Hockey Hall of Fame again." 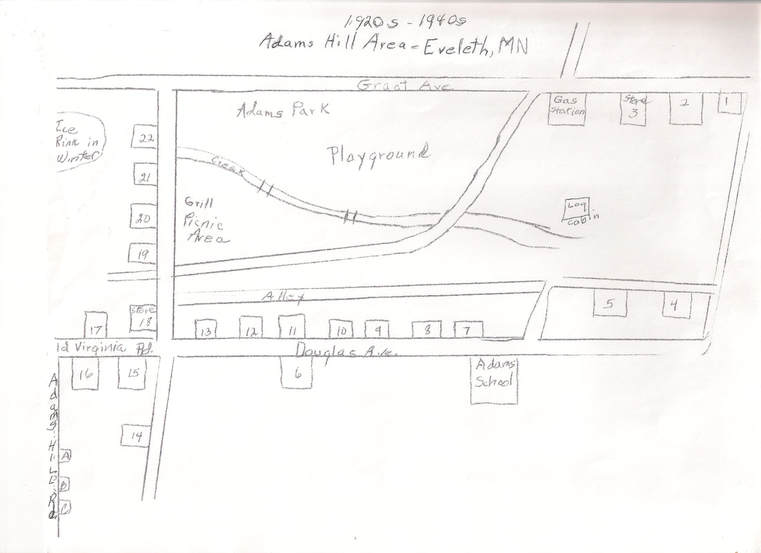 Photo at top of page courtesy of Louis Omersa. It was taken from North Court looking down Adams Avenue toward Northside Park and Adams Hill.