The earliest known photo of Eveleth's first building, taken from the northeast. The men's identities are unknown. This image appears on a new historical marker where the cabin once stood. Courtesy of Archives and Special Collections, Kathryn A. Martin Library, University of Minnesota Duluth.
West of present-day Northside Park | Built: 1892 | Lost: Circa 1960
​The hut's most notable resident was John H. Hearding, Sr. (1865–1958), who lived there in 1894 and '95. In fact, despite only having lived there for two years, several texts refer to the building as the "Hearding log cabin." Hearding was Superintendent of the Adams Mine from 1894 to 1909, when he was promoted to Assistant General Manager of the Oliver Iron Mining Company. He served on the Eveleth School Board and the Library Board and helped secure land for the Eveleth cemetery. He was also the namesake for the former J. H. Hearding School in Aurora.
Eveleth soon had sidewalks and electric lights, but living conditions in the Adams Mine camps were more primitive. The workers collected water from "a very beautiful spring," but in the winter of 1894-95, that creek froze solid, and water had to be pumped from the mine and hauled upwards of a mile. Later, two trains per day brought water from Mountain Iron.

The men ate moose meat because it was cheaper than beef, but Hearding said he "never had been fond of moose meat since as we were served everything on the critter from hocks to horns." Despite Eveleth's frontier nature at the time, Hearding recalled, "Men and women were regarded for their personal worth and friends were friends regardless of their financial conditions." ​Hearding and his family moved into a large, ornate house on the Adams Mine property in 1899. 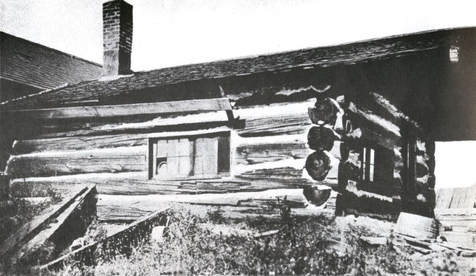 The cabin viewed from the southeast. From Eveleth's Diamond Jubilee souvenir booklet, 1967.
The cabin's post-Hearding occupancy is hard to trace with certainty. Based on census records and newspaper articles, John Morrow and his wife Katie moved into the cabin between 1910 and 1919. When John was listed as "Park keeper" in the 1920 Census, his home did not even have a house number.
The November 27, 1919, Eveleth News reported that Mayor Edward Hatch suggested the City buy the log house and "move it to the park for use as a rest room" (which in the parlance of the day meant the cabin would be used for literal resting). In January 1920, a newly-formed group called the Mesaba Range Old Settlers' Association advocated for the house's preservation "as a memorial of pioneer days of the iron mining industry on the ranges.”

City Council minutes indicated a plan to purchase John Morrow's log house and find his family a new home, which apparently took five years. Council minutes from April 21, 1925, state that Morrow was paid $150 for the cabin. Despite initial talks of moving it, the building remained in its original location.
On June 21, 1932, the City Council voted to allow Paul Vukelich to live in the cabin at no charge for one year. A current Eveleth resident recalls a man named Paul living there in the 1940s, so the Council may have kept extending the agreement.
​
An old-timer wrote in the February 1976 Eveleth Senior Citizens' Club newsletter, "I have a hazy recollection of a swimming hole at the far end of [Northside] Park and the cabin in which we changed clothes. This was abandoned after a few years." Other residents remember playing in the cabin in the 1950s. The City eventually torn the landmark down because of safety concerns, but the Heritage Committee has been unable to determine exactly when that was. 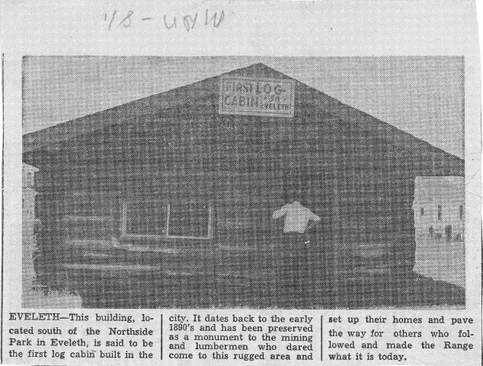 A clipping from the Mesabi Daily News, August 1, 1947.
The boulder that now marks where the cabin once stood was the brainchild of folk artist Joseph Bogdanich (1890–1973), a Croatian immigrant who came to Eveleth to escape what he called the "stinking holes" of the underground mines at Ely. He took up house painting at first but soon acquired a love for art and nature. Throughout his 83 years, he created hundreds of paintings, woodcarvings, and rock sculptures, nearly all of which he donated to schools, libraries, historical societies, and even U. S. Presidents.

For Eveleth's Diamond Jubilee, Bogdanich asked the City if he could create a memorial to the early mining industry. He built a similar monument called "Mesabi" in 1952, still visible at the entrance to Eveleth Veterans Park. The City gave its blessing, and D. Kelly Campbell, General Manager for the Eveleth Taconite Company, helped secure a piece of taconite weighing an estimated twelve tons. The huge rock was placed atop a base Bogdanich constructed.
Mayor Joseph Begich led a ribbon-cutting on July 27, 1967, assisted by Eveleth Taconite mine superintendent Bob Holgers, Diamond Jubilee Queen Jean Primozich, and Joe Bogdanich. The Eveleth High School band, directed by Bill Lavato, marched down Grant Avenue to the monument and played at the dedication.
Although a sign once explained the cabin's significance, the historic site had been without interpretation for quite some time until the Eveleth Heritage Committee dedicated a historical marker at the site in October 2017. Click here to read about the plaque's dedication.
Sources:
Eveleth's Diamond Jubilee souvenir booklet, 1967
Skillings' Mining Review Vol. XII No. 14, 1923
"Explorer of Fayal Mine is Dead" Duluth News-Tribune January 23, 1904 p. 2
Duluth and St. Louis County Walter Van Brunt, 1922 p. 514
"May Purchase Oldest House" Eveleth News November 27, 1919
"First House Built By Adams, McInnis" Eveleth News December 25, 1919
Mesabi Daily News July 27, 1967
"How Eveleth Got It's [sic.] Name" Eveleth News January 22, 1920
​Eveleth City Council minutes