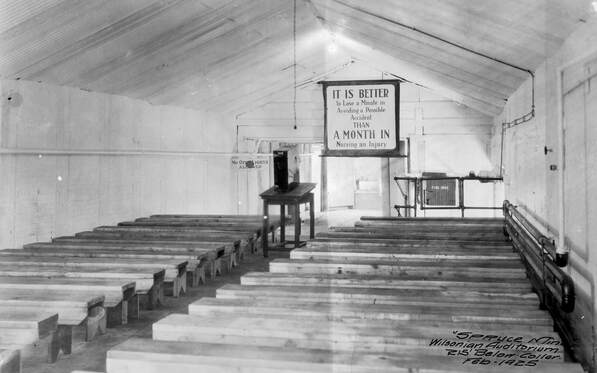 Courtesy of Archives and Special Collections at the University of Minnesota Duluth
Employees at the Sprue Mine viewed safety films in a room perhaps unlike any other: a theater more than 200 feet underground. The brainchild of Joseph Wilson, the theater was created in an unused pump room next to Spruce shaft number four in 1925. Also known as the Wilsonian Auditorium, the theater was a popular venue for viewing safety reels and the occasional comedy. Sometimes miners would even entertain each other with their own music. An article about the novelty theater appeared in an issue of the journal Electrical Mining in 1926. The Eveleth Junior Chamber of Commerce received its charter in the Wilsonian Auditorium in 1939.
Minnesota Reflections photo of miners in the Wilsonian Auditorium