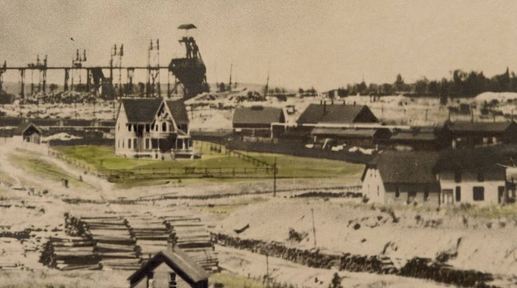 The Adams Mine, with the superintendent's house in front of the headframe. Courtesy of Archives and Special Collections, Kathryn A. Martin Library, University of Minnesota Duluth
Adams Mine property, later moved to south of Fayal Road | Built: 1899 | Lost: 1930s

The former Hearding home after it was moved to Fayal Road.
​Hearding and his family moved into a large, ornate house on the Adams Mine property in 1899.

​house much more suitable for a mining captain in 1899. The ornate dwelling was much closer to the Adams Mine and stood out in stark contrast to the engine houses, shaft headframes, and red dirt that surrounded it. It was originally identical to a house in North Hibbing, now the Mitchell-Tappan House bed and breakfast. When Hearding relocated to Duluth in 1909, his house in Eveleth was moved to Fayal Road and was eventually demolished.